As a researcher hoping to develop and test interventions for individuals with language and other cognitive impairments after acquired brain damage, I think of the randomized controlled trial as an essential method for my future work. Little did I know before working on today’s post that we had Sir Austin Bradford Hill to thank for this study design—still regarded as the gold standard all these years later. Hill is also well-known for developing the Bradford Hill criteria, a set of guidelines that can be used to demonstrate the causal relationship between a hypothesized cause and the observed effect (e.g., doctor prescribes you penicillin -> your strep throat symptoms resolve).

Hill, or as he was better known, Tony, did not start out with a passion for statistics and/or epidemiology. As a young boy of Hampstead (London), he wanted to be a doctor. He came from a prodigious family with numerous members having been cited in The Dictionary of National Biography for their scientific accomplishments. Indeed, his father, a professor of physiology at the University of London, was famous for his research on cerebral circulation, amongst other topics. Unfortunately, Tony’s dream of pursuing medical school was interrupted by World War I when he volunteered to be a pilot in the Royal Navy Reserves in 1916. He ended up being stationed in the Mediterranean, but then was sent home in 1917 with a presumed fatal diagnosis of pulmonary tuberculosis. His prognosis improved after receiving an artificial pneumothorax. While he had recovered enough by 1919 to pursue higher education, he was not well enough to study medicine. Tony required a degree program that he could obtained remotely (Sound familiar to anyone else in the past 3 years?) Tony didn’t have access to Zoom obviously, so he had to use correspondence (read: snail mail) to send his assignments back and forth (Can you imagine having to wait that long for your grades? Poor Tony must have had to find ways to cope with the suspense. No obvious refreshing of the Blackboard page for him.) In fact, he only traveled to the college twice while obtaining his Bachelor’s of Science (BSc) in Economics.

As Tony didn’t want to pursue a career in economics, he tapped a family friend, Major Greenwood, for support and was able to acquire a grant from the Medical Research Council (MRC) in the UK to study high mortality in young adults in country districts. Through the execution of the grant, he was able to expand his knowledge and appreciation for statistics, taking coursework for a BSc in Stats at University College London. The success of the grant led to his appointment to the MRC’s industrial health research board, where he maintained his membership until 1933. Tony was then appointed as a reader in epidemiology and vital statistics at London School of Hygiene and Tropical Medicine (LSHTM). He was doing so well that he eventually succeeded his family friend, Major Greenwood, as chair of medical statistics in 1945, and served as the director of the MRC’s statistical research unit.

Tony is well known for the study he conducted in 1948 with Sir Richard Doll investigating what environmental exposures or behavioral factors could separate patients with and without lung cancer. This experience – deciding what explanations of an observed relationship had to be considered to conclude that the disease was due to a particular cause- led him to later develop the Bradford Hill criteria in 1965 (see graphic below). 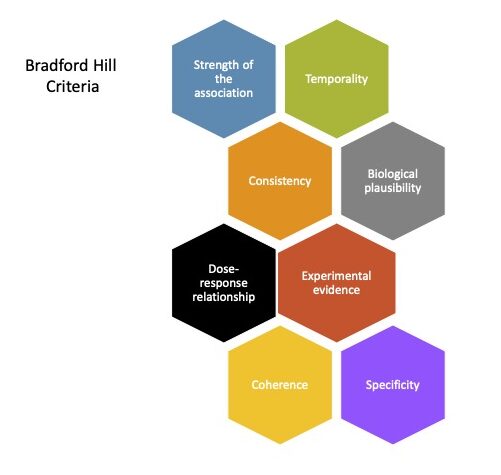 Hill and Doll confirmed that smoking was an important factor in causing lung cancer and verified this conclusion in a subsequent prospectively designed study investigating the smoking habits of 40,000 British doctors. As I highlighted at the start of the post, Hill also has been credited with the development of the randomized controlled trial design, an approach to assess the effect of interventions by randomly allocating patients to different treatment schedules (i.e.,  experimental and control group). The adoption of this method into commonplace research started with him convincing two MRC committees to use randomization in their trials: one assessing the value of streptomycin for treating tuberculosis in 1948; and another investigating the benefit of whooping cough immunization in 1951.

Although Hill was a proponent of randomization in clinical trials, he always took the moral high road, urging medical researchers to act in the best interest of the patient. This sentiment is clear in one of his most famous quotes: “All scientific work is incomplete – whether it be observational or experimental. All scientific work is liable to be upset or modified by advancing knowledge. That does not confer upon us a freedom to ignore the knowledge we already have, to postpone action that it appears to demand at a given time. Who knows, asks Robert Browning, but the world may end tonight? True, but on available evidence most of us make ready to commute on the 8:30 next day.” Food for thought, Martinos!

Tony retired in 1961 to make room for up-and-coming professionals and spend more time with his wife, who passed away in 1980. He subsequently lived with his daughter, where he suffered with debilitating transient ischemic attacks (TIAs). He eventually had to move to a nursing home and died there at the age of 93 on April 18th, 1991. Sadly, he did not reach his goal of having been recorded in every census taken in the 20th century. Yet, his accomplishments have lived on into the 21st century, and are still being used today. Researchers, especially in the public health domain, have implemented the Bradford Hill criteria in studies investigating a range of topics including the relationship between sugar-sweetened beverages and obesity and vitamin D and pregnancy outcomes. Further, the World Cancer Research Fund evidence grading criteria (i.e., convincing, probable, limited evidence, suggestive limited evidence, no conclusion, substantial effect on risk unlikely) is example of how the Bradford-Hill criteria are still influencing medicine today.

Overall, it is incredible that Tony was able to achieve all that he did, including at one time being considered the most respected medical statistician, despite not having a degree in medicine or statistics. We all can take a lesson from how he carried himself, too. He has been described as a quiet, humble man, who did not force his opinion on his colleagues, but made sure to express his perspective clearly. He also tended to avoid controversy, letting the facts speak for themselves rather than retorting back at this critics. He took his lectures seriously, practicing them ahead of time, and including witty comments. Tony kept an “open door policy” encouraging younger colleagues to come to him for his advice. He also prided himself on maintaining the ideal environment for younger colleagues to learn, grow and be successful.  Sounds like someone who would have been well-liked and welcome at the Martinos Center!

If this post piqued your curiosity re: the Bradford Hill criteria and how they are being used currently, check out these recent papers:

At that’s your latest dose of InsideOut, until next time, be well! 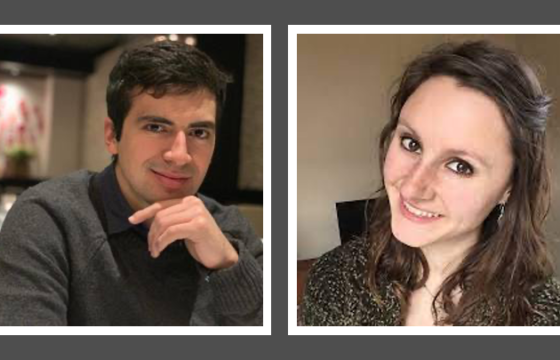 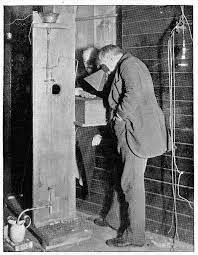 On this day in 1903, Thomas Edison raised the red flag on X-rays

A Story of Enlightenment